Measure accurately your conversion churn thanks to the funnels

We just unveiled a tool that will help you further in your audience measures, the conversion funnels. 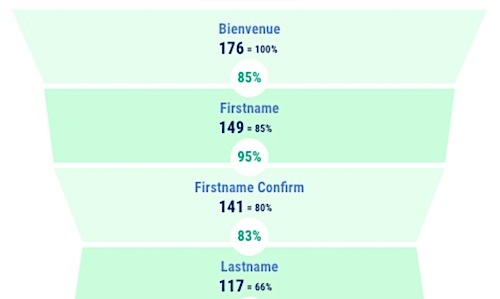 What is a funnel exactly ?

For instance, if you use your chatbot for leads collecting purposes such as :

A tracking tag placed at the end of the form (here : the Phone sequence) will allow you to know the number of users that filled the whole questionnaire.

Nevertheless, this system doesn't allow you to measure the audience churn during the conversion path or compare the number of users having finished the questionnaire to those who started it and enhance the chatbot :

That's why funnels are a good ally ;)

How to use funnels in Botnation ?

The idea is to choose 2 or + sequences that follow each other, then wait for your traffic to grow and analyse their behaviour.

In this purpose, choose the chatbot on which you wish to put the funnels and open your Analytics tab :

Scroll until the bottom of the page, the "Funnels" part appears. Choose "Add a funnel". Name it, choose the starting sequence (in our case, it would be "Surname") :

Then, choose the second sequence (obviously, only the following sequences will be suggested), here : "Email", then the last one "Phone", and save.

Your funnel is ready and appears on the list. You can create as many funnels as you want and delete them via the trash bin logo. The measures sequences appear on the funnel name.

Once you start counting new users, click on the eye logo and the funnel appears : 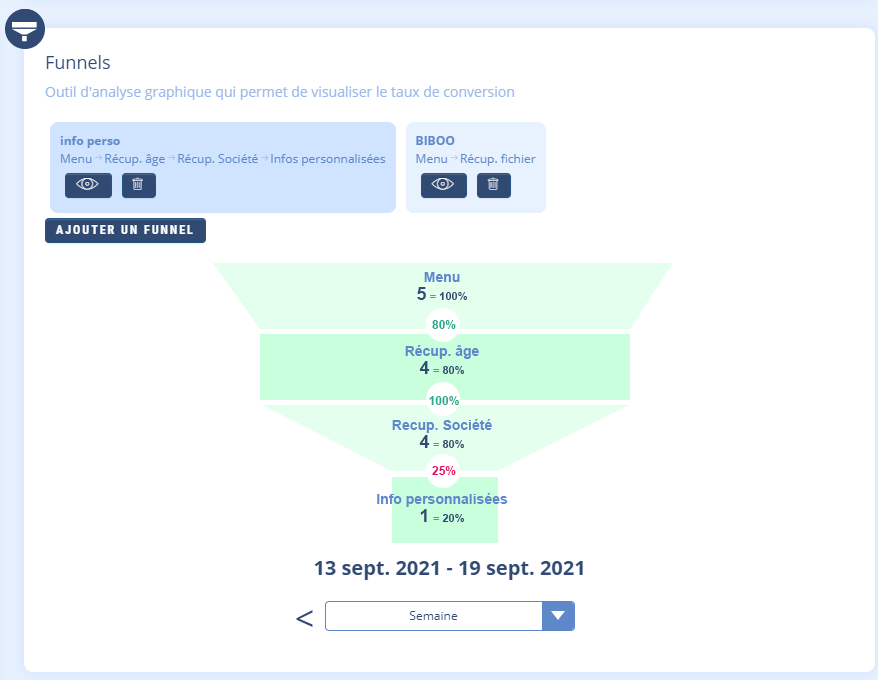 You can choose the time slot to have previous measures. Under each sequence name, the number of users that made it to the current sequence is displayed as well as the % of users compared to the previous one.

How to interpret the funnels ?

Then, "Recup. âge" only counts 4 users, then 1 user left. It represents 80% of the visitors compared to the previous step.

Those 4 users have all been to the next one, this represents 100% compared to the previous step, but 80% of the users that began the path (5)

You now know only 20% of users made it to the end of the form and the biggest churn happened between "Recup. Société" and "Info personnalisées". It's now time to make conclusions ;) such as enhance the wording or delete a step.