Botnation just updated its NLP module for an even more clever chatbot.

The Botnation team has been working for months to bring you a major evolution of the language processing algorithm of your chatbots.

We are very pleased to unveil the following updates :

"Now, only one good expression is enough"

There's no need to search variants to conjugate a verb, you only need to minimalise the NLP rule by simply indicating :

You needed to set up :

For : "She wanted to know if you rent flats"

>> As you see, the rule is strictly the same for those 3 examples on the v2 whereas you needed 3 rules on v1 for the very same result. It applies for every conjugation.

Need a clue to simplify your life ?

In the recommendation tool, after the user typed anything, an information is indicated in [...]. This will allow you to add relevant rules and expressions.

The user typed : "Do you sell bikes for long trips ?"

If no rule matched this request, then the tool suggest :

"Would you sell an affordable bike for a trip this week-end ?"

"Yesterday, you sold me 2 long trip bikes, I have a question on warranty please"

In those 3 cases, Botnation's NLP will take in real time the infinitive verb ("sell") and the singular words ("bike" and "trip"), despite the conjugation. 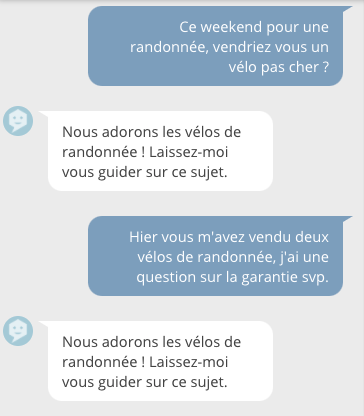 In your chatbot's advanced settings, you can now find an option allowing you to use v1 or v2 for the NLP.

The new chatbots and future templates are now set to NLP v2 by default.

On the other hand, if you prefer the operation of v1, out of habit or curiosity, nothing prevents you from modifying the configuration of a new chatbot by switching it from v2 to v1 on this same settings screen.

Honestly, the libraries on Botnation are fantastic, but they used to be only usable as simple expressions. This could be problematic and often generated positive rules on a single word.

Nothing prevents you from using complex expressions, composed of several words, negative or outgoing words, in the libraries but we noticed that they are often used as simple lists of synonyms (auto, car, automobile, vehicle etc...).

Now you can place a library at any stage of an expression, such as :

The equivalent will be :

In the library menu, I generate a library "dog"

I can now integrate this library in a rule :

And it will answer, magically, positively to requests such as : 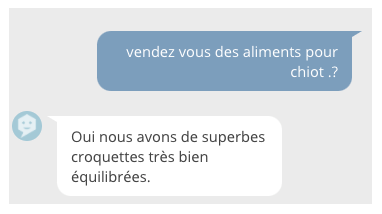 And Botnation keeps on correcting your users' mistakes ! 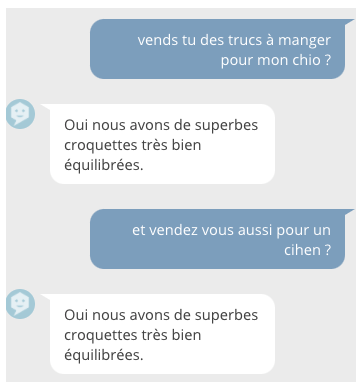 A single constraint, we limit the use of libraries to only one library per expression. If you specify the use of a second library in the same expression, it will not be processed and will generate a skewed rule, based on the name of the library, which will certainly never be positive.

As a reminder, here's our guide to libraries.

To put it simply, a tunnel on the NLP Botnation relaunches the entire search on a new context in a transparent way.

The exit trigger "_" allows priority redirection to a sequence, and therefore to a possible context. The tunnel operator "=" goes much further by allowing a search on the whole user's request in the affected context. The chatbot can then contextualise the discussion and continue it without interruption.

Chatbot : Zenault is excellent, it's French ! No second vehicule ?

User : Yes, I do have a Kiat but the gearbox is dead.

Chatbot : On Kiat, the gearbox in sensitive, especially for pre-2015 models, is it your case ?

In short, the tunnels allow second-generation relaunches without having to go through a precision request or foresee all the cases in the general context, you just have to isolate them well for each context. This is fantastic for cases like :

"I have a problem with my credit card" -> Context CB

"I have a problem with my credit card, I got it stolen" -> Context CB -> Stealing

Contexts are not generalized on every Botnation's chatbot. We think it's an essential feature to create a performing chatbot and every user deserves it !

Here's a link to get to know more on contexts in your chatbot.

A complete guide on Artificial Intelligence in Botnation

We gathered all the AI and NLP dedicated guides on Botnation in one and only highly structured document. To ease the process, so as you are able to read it at the office, in the subway, at the beach, we adapted the guide in a PDF version that be downloaded below.

All you have to do is to make your chatbot evolve and we are always available to answer your questions and assist you, so don't hesitate to contact us on the interface. Our team is already working on the next evolutions of Botnation... you'll love them !