The Facebook Messenger chatbots allow you to retrieve easily an email and a phone number. Here are our do's and don'ts.

Facebook Messenger chatbots ease the lead collection process through options that are not available on web chatbots : 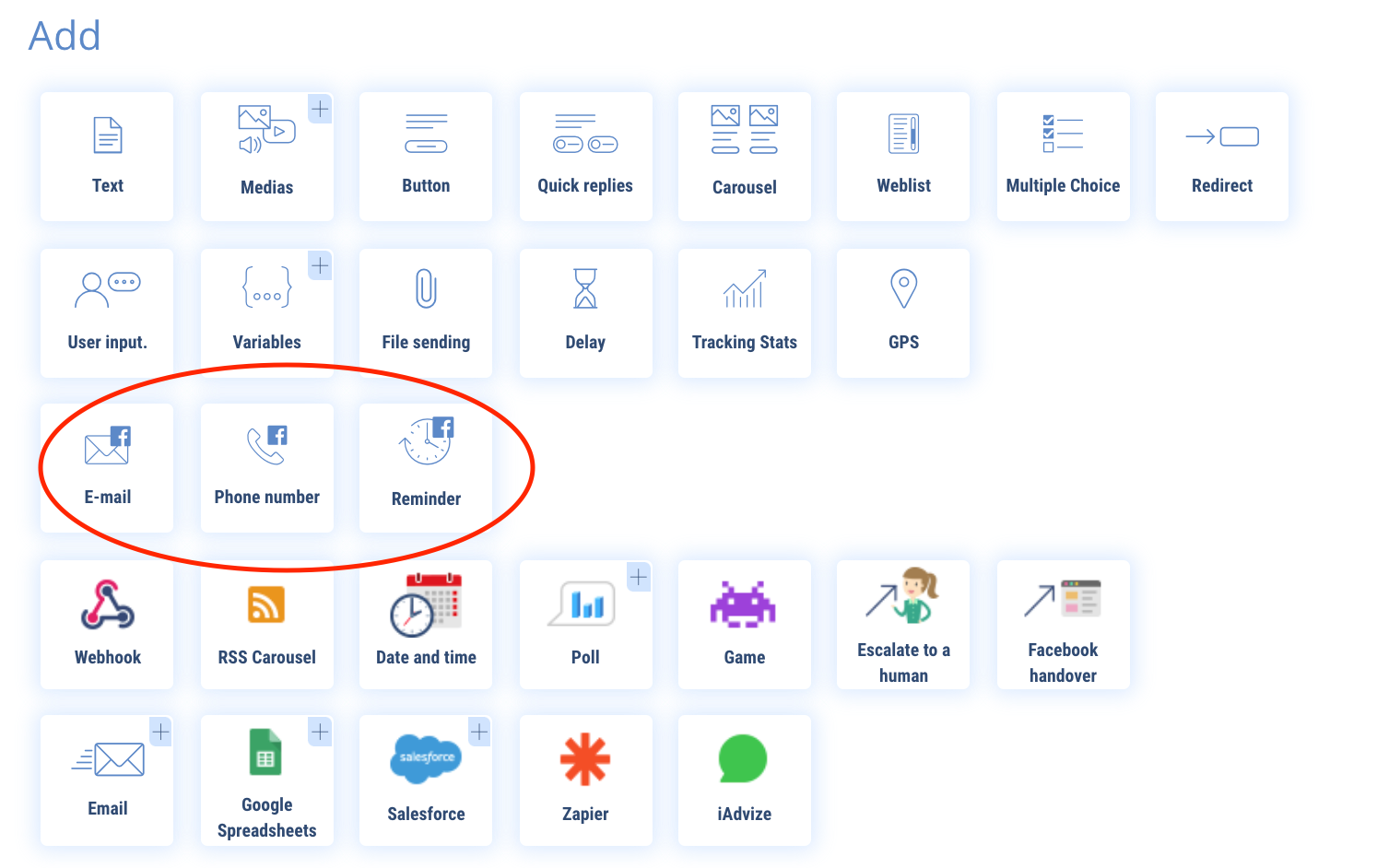 If you are currently discovering those features (and there is no problem with that !), they are used to capture an email and a phone number declared by your user on Facebook. Indeed, any person connecting to a Facebook Messenger chatbot has to be logged on a Facebook account, otherwise, it won't work. When creating the Facebook account, you are required to declare an email and a phone number that are registered by Facebook. In the platform settings, you can then register your preferences in terms of privacy.

How does the email and phone number collection through Facebook work on Botnation ?

Let's take a concrete example : in your chatbot, you insert a form in 3 steps aimed at collecting the user name, the email and your prospect's phone number. For the first question, you will use the system variable {{USERNAME}} that will allow you to collect the name registered by the user when he subscribed to Facebook.

After having clicked on the corresponding icon, the setting will appear as follows : 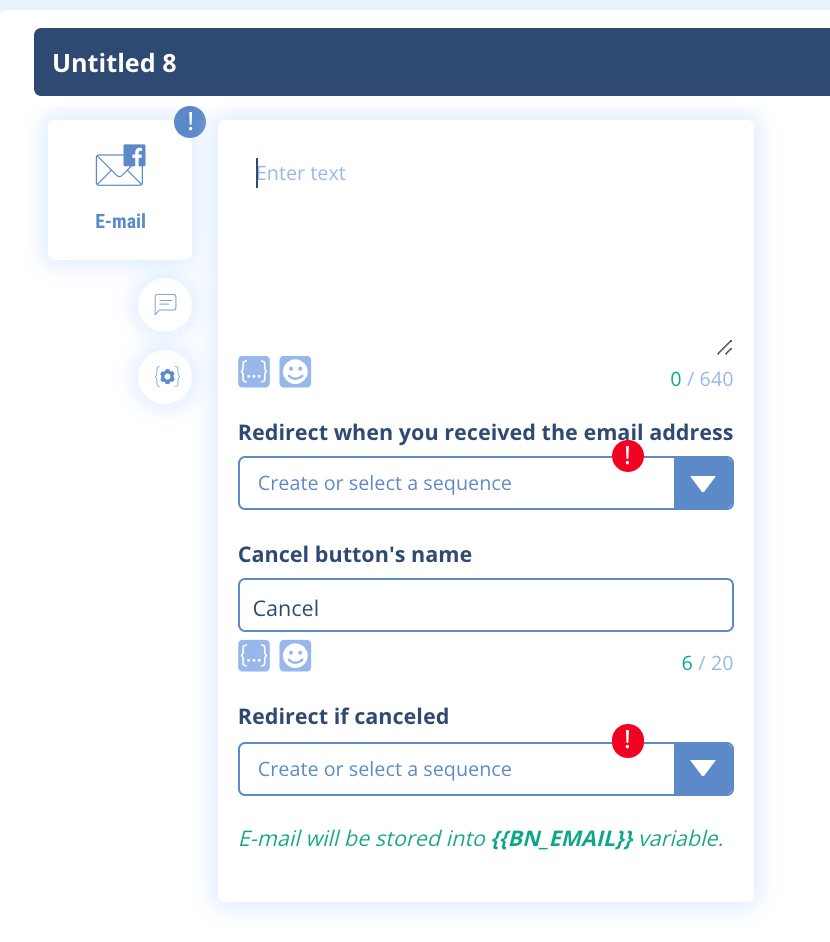 You'll just have to decide to which sequence the user will be redirected when the email is automatically retrieved in the variable {{BN_EMAIL}}. A good practice could be to leave the choice to the user to not answer by suggesting a cancelling button. Here, we indicated the button is called "Cancel". You can also indicate where this button redirects (for instance, to the phone number part). Then, the user has 2 options :

2) Choose cancel and you won't retrieve the user's email. Too bad ! But we'll explain how to avoid this case.

Here's the chatbot's message is displayed on the user's side. Use the test button on the top right hand corner to test the chatbot in real conditions :

The chatbot then suggests my Facebook account's email, it's all good !

The modus operandi for the phone number part is quite similar. Choose the corresponding icon, edit the text, choose the redirection sequence and set a cancel button, this is what we did for instance : 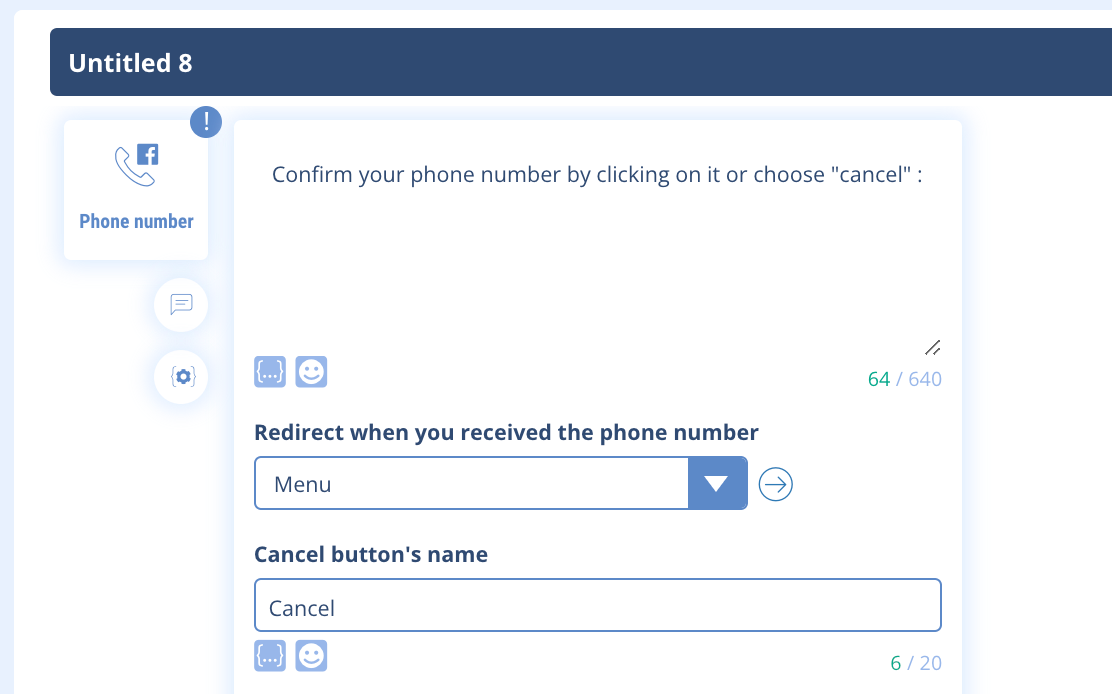 If the user clicks on the button corresponding to the phone number, then this value will be retrieved under the variable {{BN_PHONE_NUMBER}}. On the user's side, we'll then have :

We observe the phone number doesn't appear. Don't be afraid ! The explanation is simple. I have not declared my phone number on Facebook as it's not compulsory. Then, the chatbot cannot retrieve this information. In the contrary case, Facebook would have transmitted it to the chatbot's variable.

How to avoid these cases ?

Suggest your users to fill a phone number or an alternative email.

It is very common to have several emails, phone number or Facebook accounts (personal, professional etc). To avoid to lose information, we advise you to offer an alternative to your users by giving them the possibility to fill another email / phone number than the one declared on Facebook. There are several advantages to that :

How to proceed ? In this purpose, just use the cancelling button by adding an intermediate sequence offering to add a phone number or an email.

It's very easy, but don't get lost in the settings ! We advise you to follow the steps or to write the flow on a paper (this helps more than we think).

Go back to the sequence where you're asking the email. Explain your user he can (1) click on the email that appears to confirm (2) choose to type another email. Here's our example : 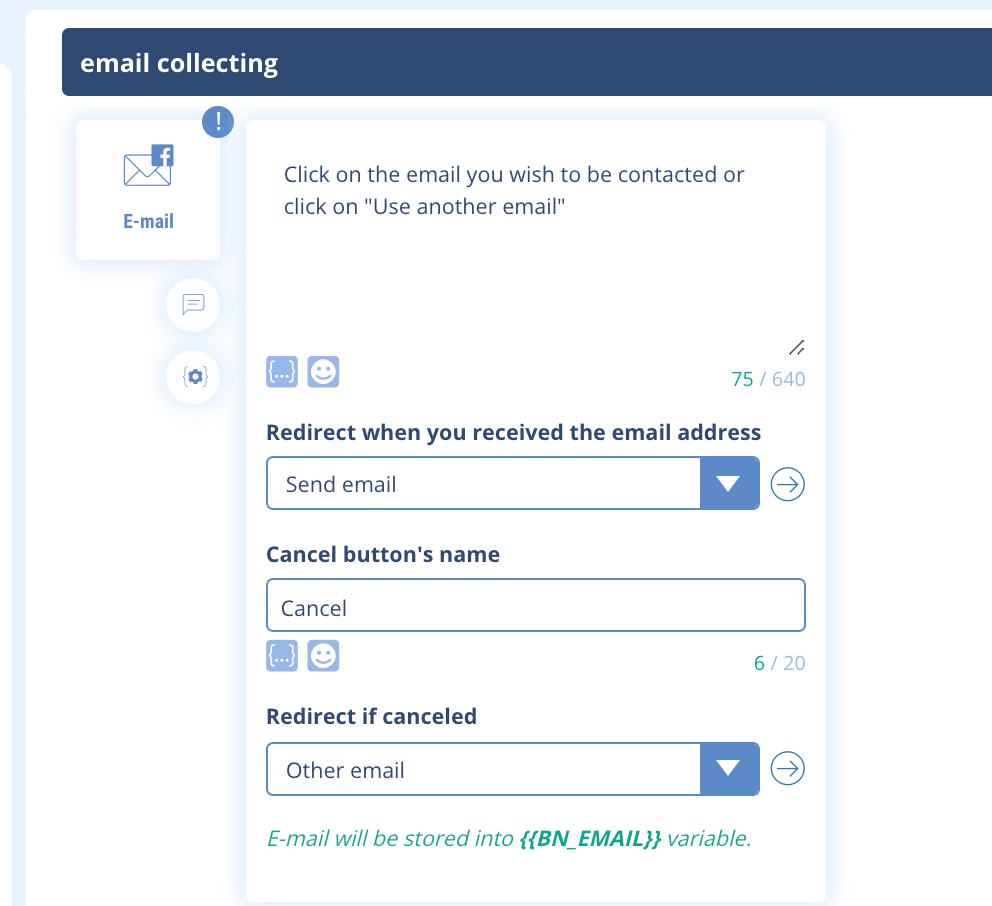 We have modified the cancel button which redirects towards a simple sequence with a user input. This is what appears on the user's side :

At this level, there are 2 cases possible :

1) The user clicks on the email, then it will be recorded in the variable {{BN_EMAIL}} and the user will be redirected to the following steps.

2) The user wishes to type another email, then he will be sent to the alternate sequence

Let's get back to the second case. Create the alternate sequence to retrieve the email and add the feature "User input". 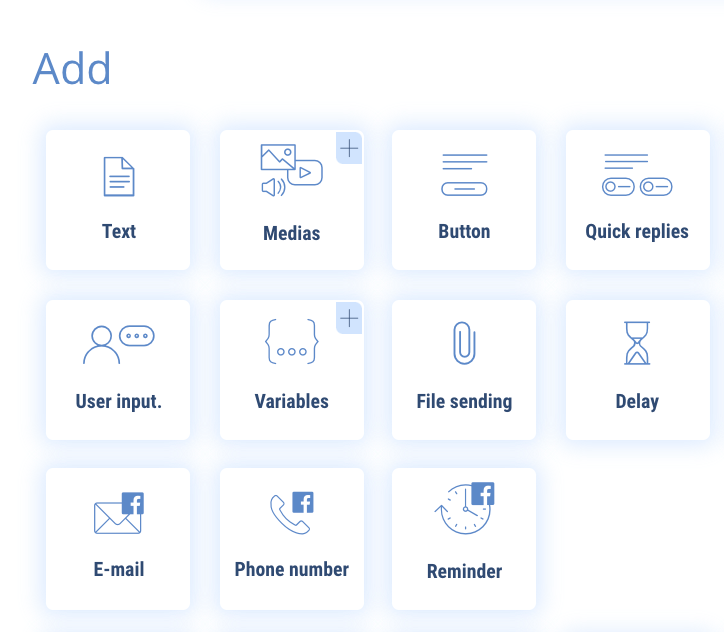 Then, ask your user to type his email. Create the new user variables which will convey this value. In our example, we called it {{EMAIL}}. You can choose "Variable type - E-Mail entry" so as the "@" is detected.

Here's how it looks : 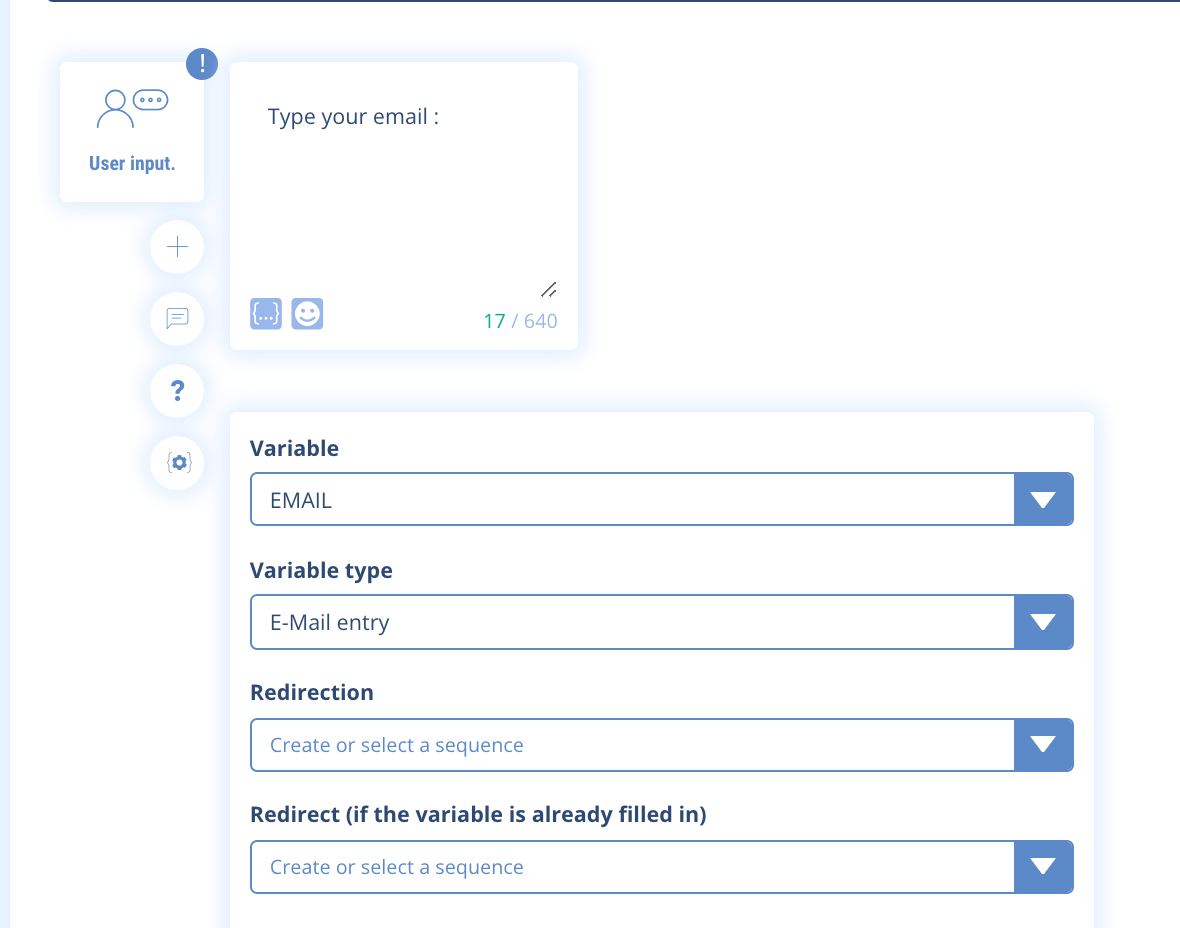 Still, you can always add a cancel button.

Here is what we get :

You now got the idea ! Just replicate the operation on your phone number retrieving.

If you do it well, this will help you to collect many emails / phone numbers and avoid a big churn.