All Collections
❓ Frequently asked questions (FAQ) - BOTNATION
How do I add personas to my Facebook Messenger chatbot?

How do I add personas to my Facebook Messenger chatbot?

Give multiple virtual identities to your bot

A persona is a virtual identity that the chatbot can assume at a given time.

When a persona takes control of the conversation, the chatbot's avatar changes accordingly and the persona's name appears above their first message.

It can be practical to go from the sales department, to customer service, to really script by involving several different interlocutors. In short, having several chabots in a chatbot, especially by associating them with contexts.

A version of this guide dedicated to Web Chatbots is available here.

Go to the "PARAMETERS" section, under the "Appearance" tab, you will find the "Add a persona" button.

You can create several persona if necessary.

Personas are activated at the level of the parameters of a sequence (See the article on the Settings of a sequence). Click on the icon in the form of a white gear at the far right in the title bar of the sequence.
Choose the persona in the persona drop-down menu.

When the persona is activated it appears in the title bar of your sequence.

And here it is, everything that will appear in this sequence will be as if it was this persona who spoke.

IMPORTANT : You will not see the change of persona during your tests. You will only be able to see them when your chatbot is published on a Facebook page. 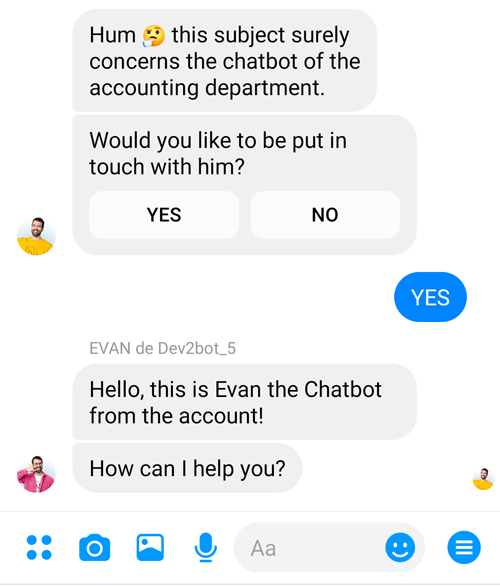 If you do not activate any persona in a sequence, the main avatar of the chatbot will be displayed..

IMPORTANT: If you want a persona to speak during several sequences, you will have to activate it for each sequence in which you want him to appear.