Life cycle of a variable

A tool to manage your variables

This feature allows you to display the life cycle of your variables as a graph. Thus,
you can quickly know in which sequences are written and read your variables.

This feature is accessible via the tab "Variables" present on the construction page of
the bot: 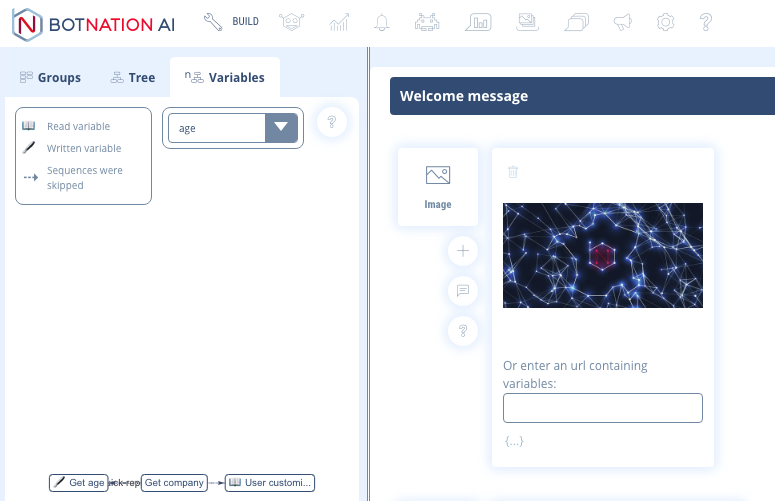 Choice of the variable

To choose the variable to analyze, click on the drop-down list and make your choice.
A graph representing the life cycle of the chosen variable will appear.

A variable is said to be written when it is modified by a function (Assign, Increment,
Calculation, User Input, certain buttons, etc.).
When a variable is written in a sequence, the name of the sequence is displayed in
the graph along with the icon of a pen.

It is said that a variable is read when it is exploited by a function (Text, Condition,
Calculation, etc.).
When a variable is read in a sequence, we display in the graph the name of the
sequence accompanied by the icon of a book.

The order of execution is represented by arrows. Thus, we can ensure that a
variable is well written before being read.
For the sake of clarity, a sequence of sequences can be ignored if the variable is
neither read nor written. When this is the case, the arrow is dotted indicating that
there are other sequences present but having no impact on the variable.

It is possible to click on a node to see the detail of the sequence in the right part of
your screen.

It is possible to modify the size of the graph by zooming in / out using the wheel of
your mouse.
It is also possible to enlarge the area by moving the double vertical bar to the right.